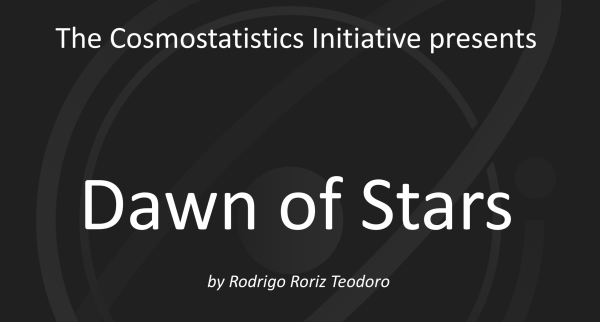 Dawn of stars tells the story of how stars are formed. Most stars are born in groups which are truly stellar nurseries composed by clouds of dust and gas. This birth process is full of episodes, some of which are represented musically in the four parts of the Dawn of stars.

The music starts representing the slow process by which these clouds of dust and gas start to aggregate and concentrate due to the action of gravitational forces. The bowed vibraphone sounds represent the clouds of dust, the irregular rhythm patterns of the snare represent the chaotic nature of some elements, always with rhythmic patterns that seem apart from the rest of the ensemble. Some elements that later will become the main theme of the piece are presented here in the marimba.

As the process unfolds, the clouds are already more compressed into a stage known as protostars, and a large cosmic ballet of matter — which will later give origin to multiple stars — is taking place. The melodic elements are more present here; marimba and vibraphone alternate the main theme, playing variations of it. The main theme is not presented in its full form yet, it is forming like the stars.

Afterwards, the music illustrates the initial moments of the star’s life, once after a brief period of darkness due to the enormous density of concentrated matter at the position of the protostar, it reaches a state of sustained nuclear fusion in its core, becoming brighter and becoming “a star”. After a brief period of silence, the glockenspiel, the instrument representing the light in this piece, finally enters the scene, playing small gestures. In this little section we have our first fortissimo and first tutti, all instruments are playing together and loud.

Finally, the piece conveys how we, humans, experience the stars in the sky and how we try to infer, discover and understand the process just described, using our eyes, ground and space based instruments. Here, the main theme is finally in its full form. It is played by the vibraphone, while other instruments support it harmonically or rhythmically. The glockenspiel performs an important role here, plays counterpoint phrases against the main theme, complementing the vibraphone’s leading melody.

This was the first art-related project to be developed by COIN, in March 2021, in collaboration with Rodrigo Roriz Teodoro, as part of his graduation project to obtain the degree of Master in music composition awarded by the Marshall University (USA).

Special thanks to Raquel Shida (ESO – Germany) for assistance with imaging mining.